I don’t know about you, but I think the title of this post could be a really awesome name for an 80’s big-hair coverband.

Anyway…the suet finally arrived. From England. I hadn’t realized I was going to be shipping shredded, dried beef fat across the globe to fulfill this culinary goal, and I’m a bit chagrined about it. But at least I can say that for this first foray, I managed to do this as authentically as possible.

The suet was definitely the most difficult ingredient to obtain. In the process of doing so, I learned a little bit more about it. Suet is not just beef fat, but is, more specifically, the fat found on the kidneys, livers, and stomachs of sheep or cows. It is then dried and shredded. This had me wondering how Jane would have accessed suet in her day. Meat would have been obtained from a butcher, and would you also have gotten your suet from the butcher as well? Or would you have ordered liver and then made your own? Would it have come already dried and crumbled or as a more lard-like substance? Unfortunately, my research has not yet yielded that answer so I cannot tell you! I have a Jane Austen cookbook coming, so I’m hoping to add more here as to some of the history of this dish.  If any reader does know more about where Jane would have gotten suet for this, and many other, dishes, please leave a comment below.

Overall, my experience of baking this dish is that it’s quite simple to make, though I’ve noticed that many English recipes call for caster sugar, which is finer than table sugar, but not quite as fine as powdered or icing sugar. Using advice gleaned from a google search, I ran my cane sugar through a coffee grinder I keep just for herbs and such to achieve a finer texture.

I cooked the spotted dick in a lidded pudding tin in a deep saucepan 2/3 full of water. After an hour (the recommended cooking time), I took the lid off and found the pudding to be moist and very greasy to the touch (thanks suet!). Thinking it was not yet done, I put it back in the water for another 15 minutes. Ultimately, I ended up with a spotted dick that was very thick and heavy. When we ate it about 8 hours later for dinner, it was exceptionally dense. The custard that accompanies it certainly helped with that, but I can’t say I found it to be a particularly exciting dish. I’m glad to have done it, and I think I’ll try other puddings in the future, but probably not this one. If you do try this out, I recommend timing this dessert so that it’s made more closely to the time you’re going to eat it, and then possibly don’t cook it as long.

The family votes are:

Sarah – meh to both spotted dick and custard, though she liked the custard best.

Jane – liked the spotted dick but not the custard.

Bwindi – still waiting for her plate. 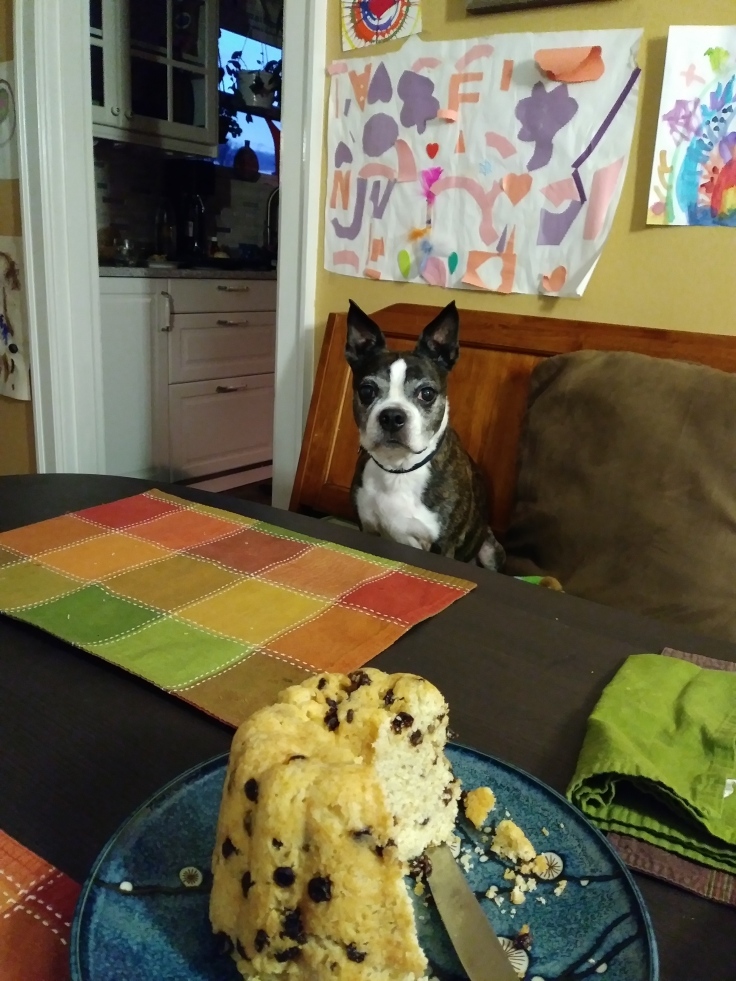 My next project is….making my daughter Jane an empire waist, Regency-style dress. I’ll be using my sewing machine because, seriously, who has time to do it full authentic?