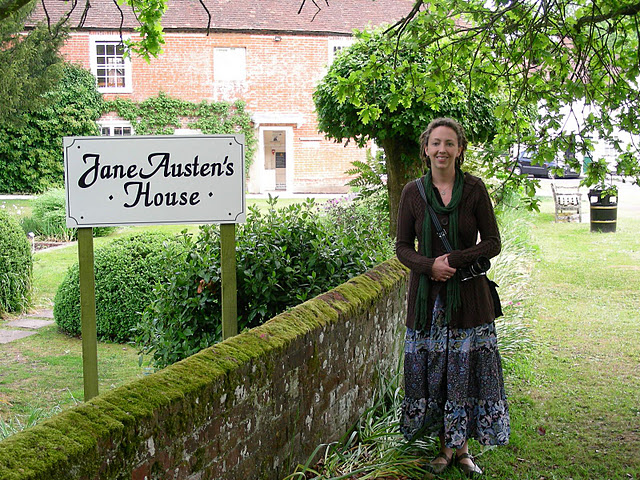 Today is my 41st birthday. Today, I begin the year in my own life that was to be the final year of Jane Austen’s, and this year alone, this one single year, is the entire reason for this blog.

Come with me back in time, some 10 years ago (after returning from the trip shown above) when, standing in my kitchen, I turned to my wife and said, “I’ve just had the best idea ever!” She waited with the patient gaze of someone who hears the best ideas ever about four times a week (day?!) But this one was really it.

“Ok,” I went on. “In 10 years, when I turn 41, I’m going to dedicate the entire year to Jane. I will only read books by and about Jane, movies and television made from her works or about her.” In my imagination of my younger self, I picture me clapping my hands and then doing some kind of ta-da, jazz hands gesture. “What do you think?”

If I am true to form with all my brilliant ideas, so is my wife in her response to them.

She’s forborn quite a lot regarding my Jane Austen fascination and dedication, including my stalwart refusal to consider any name other than Jane for our oldest daughter. It was simply not up for discussion. So I wasn’t entirely deflated when she was less than ecstatic. I would guess we were having the same thought: I’ve got 10 years to talk her into/out of this.

Over the years, I have come to realize that an entire year dedicated only to Austen is probably not feasible. Worse still, it occurs to me that if I can overdose on chocolate pudding and never want to eat another bite of it in my life, it’s entirely possible the same tragedy could happen with Jane. Exceptionally unlikely, but at the edges of every universe, there exists an unexpected margin.

So, if perchance you have been reading this blog or stumbling upon it, what you will find is a rededicated site to one reader, cook, homemaker, and writer’s experience of reading mostly Austen and Austen-themed content for the next six months, ending the first part of this year-long experience on the day of her death. I will move in the order that seems most sensible to my writerly self: the order of publication.

First up, Sense and Sensibility.

4 thoughts on “It all begins today…”